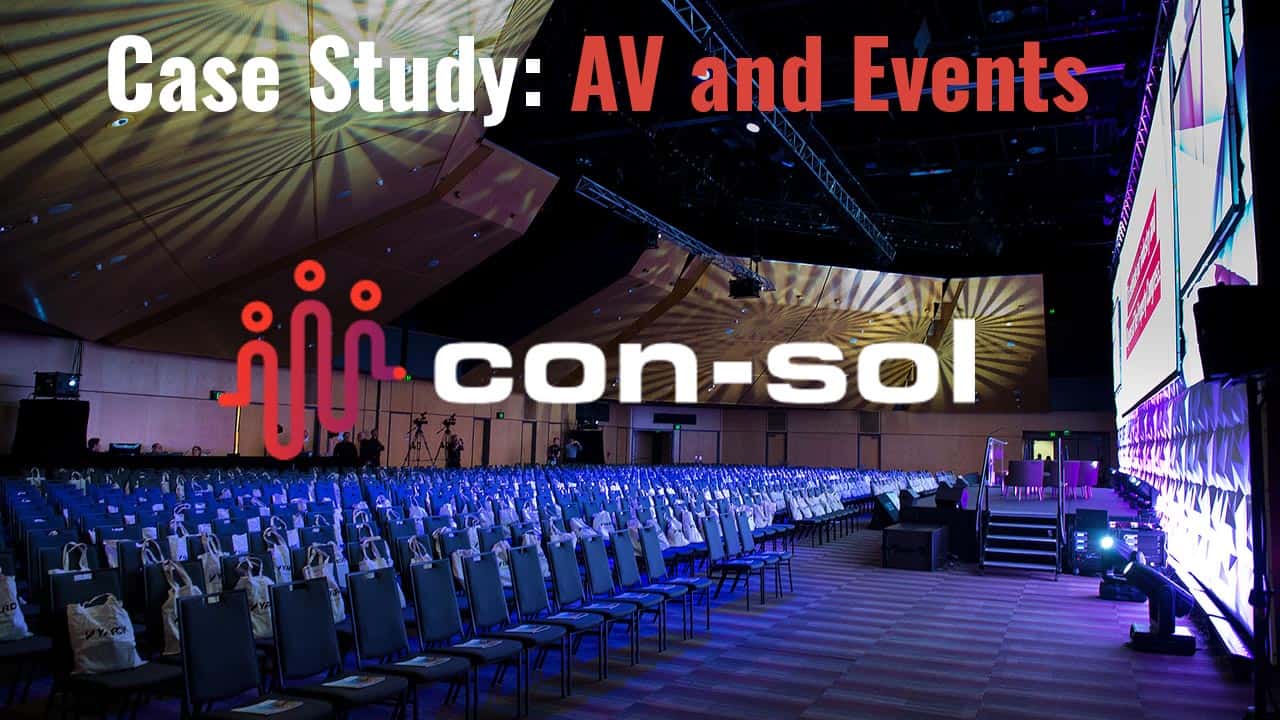 Con-Sol, like most Australian businesses, has been through a period of deep self-reflection over the last 24 months.

As a Gold Coast-based business delivering exceptional live events to their broad range of corporate and small business customers, it’s fair to say that the COVID years of 2020 and 2021 were transformative years for Con-Sol Director and General Manager Mike and his business partners.

With domestic travel at a standstill, the cavalcade of national conferences held on the Gold Coast quickly dried up, whilst the local events scene was equally quick to shut down.

The word ‘pivot’ has been thrown around a lot over the past three years, but few industries had to change direction as quickly and as rapidly as the events industry.

“[At the time], we had started with a marketing agency and we were running a Google ads campaign,” Mike said.

“We’d started some optimization work on our website. So we had this sort of digital marketing brief that we were working to.

“We were just starting to see some results from that in terms of lead generation, we hadn’t got to conversion at that point, and then COVID came along and kind of shut that down and we just couldn’t spend the money on it.”

Mike and his team had to quickly find new ways to generate revenue, with a natural progression into online events, whilst the conversion of their warehouses, typically used to store the gear they use to produce live events, into production studios opening up a whole new world of revenue streams, all of which remain viable today.

With brand new services to offer, but less and less money to invest in marketing these services, Mike turned to LinkedIn.

It was a super time consuming process.

“I’ve tried my own LinkedIn campaigns on several occasions with period amounts of success where typically I’ve spent a lot of time researching specific industries, looking for contacts in specific roles, and then sending them an email message and seeking a connection and trying to get a conversation started,” Mike explained.

“Firstly, it was really laborious getting to the point of figuring out who those people are and who I want to try and connect with.

“And then secondly, it’s been really challenging getting a response and some level of engagement.”

Despite the painstaking hours it took, there were some green shots of success.

“I had some success. So I had a strong feeling that LinkedIn outreach has got legs, it’s just about getting to a wider audience in an automated fashion and being better at the messaging than what I could be.”

With a desire to build on the limited success enjoyed doing it himself, and with a broader view from his business partners that he should be spending his time on other parts of the business, Mike was introduced to Ryan from B2BLeads.

With a Con-Sol board member having worked with B2Bleads in a different role, Mike was keen to better understand how outsourcing his LinkedIn Outreach program could build on the early signs of success his own personal efforts had produced.

What shocked Mike was just how confident Ryan was that the processes he and B2BLeads could implement for Con-Sol would start to generate activity.

“One of the things I wanted to know was, was just how quickly should we expect to get some level of activity,” Mike said.

“I was thinking in terms of days and weeks.

“Ryan was thinking more in terms of minutes and hours.

“His response was, you’re going to get activity immediately, which really surprised me.”

“Sure enough, day one, things just took off and it’s needed some tweaking, but we had some immediate activity well beyond what we’d ever experienced, trying to do this thing ourselves,” he said.

B2B Leads ability to understand the value proposition that Con-Sol offered to its clients and the key decision makers within the sorts of prospects Mike and the team wanted to target was crucial to its ability to deliver instant results.

“I felt B2B Leads understood our business, they comprehended the things that were important to us and directed me in a way so that I could sort of draw out what the key selling points were for us,” he said.

“They got to that quite quickly succinctly and understood it well, and the proof is in the pudding where we are getting some results, which is tremendous.”

Three months into working with B2BLeads and Con-Sol has generated a 275% return on investment.

“And there’s a bunch more leads we’re still working on,” he said.

“On top of that, what we have converted already is easily covering the cost of B2B Leads, but what’s not obvious perhaps when you look at it on paper is that some of this revenue will be recurring.

“The leads that have been converted that we’ve done business for, they all have more business.

Mike said he had been impressed with the manner in which B2B Leads was able to automate so much of Con-Sol’s LinkedIn Outreach program, without losing any sense of authenticity.

By creating a personalized experience for the prospects, Con-Sol is not damaging its brand in the marketplace and is instead delivering real value to the connections they are making.

“B2B Leads brings a really clever level of automation to what they are doing, but it’s complimented really well by Ryan’s own personal oversight and direction,” he said.

“You never feel like you are just plugging into this big machine. It actually feels like it’s really quite personal, even though automation’s at the center of this.”

Having rated B2B Leads a 10 out of 10, the Con-Sol team can’t wait to see what the next three months of working with B2B Leads can do.

Ready to take your LinkedIn lead generation to the next level?

Book a call with our team, learn more about what makes us different and whether or not our strategies would be a good fit for your business.